Congratulations to the Brentwood Gazette on 100 Years In Print 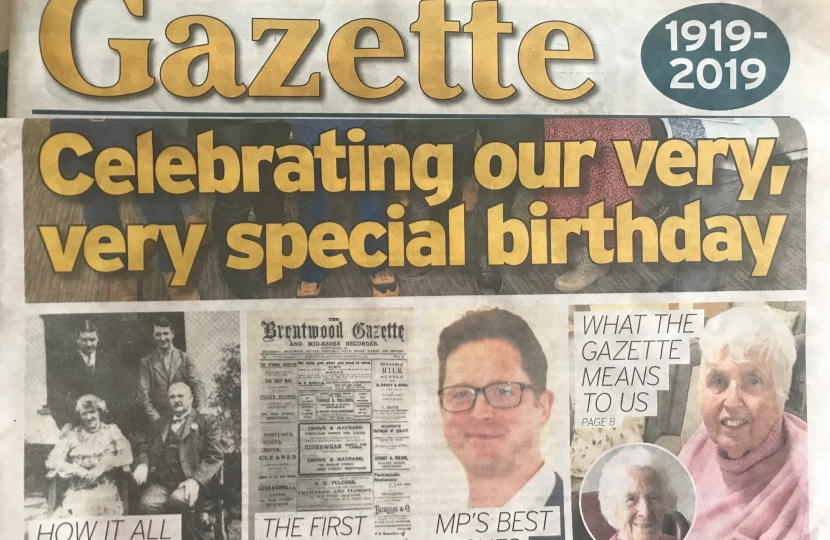 When the Brentwood Gazette was first published, the towns and village which now make up the Parliamentary constituency of Brentwood and Ongar largely lay in what was then the Chelmsford constituency. With the move of the Gazette journalists from Brentwood to Chelmsford and the decision to broaden the scope of the paper to include news from far further afield than its original patch of the town of Brentwood it is, oddly, reflecting the news of the main areas included in Ernest Pretyman’s 1919 constituency.

Ernest Pretyman was the Conservative MP for the area, serving from 1908 to 1923, during a period of huge social upheaval and change as the fallout from the Great War affected social class, women’s rights and the way news was communicated to the masses. The arrival of a new local newspaper bringing local news to local people must have noted the speeches in Parliament made by their local MP – not least when he played a part in the resignation of Austen Chamberlain as Conservative party leader in 1922.

I’ve written my fair share of articles for various publications – from a scoop for the school newspaper which nearly led to a revolt by governors, to pieces for the BBC History magazine, and now a weekly column for the Brentwood Gazette. I’ve even published my own annual newspaper in the last two years, delivered to every house in the constituency, to ensure all those living in Brentwood, Ongar and all points in between can see what I am doing to help them with their concerns and represent them in Parliament.

I have an online presence through my website, and on social media through Twitter, Facebook and Instagram. That said, I still love a newspaper. To be able to pick it up, read it, cut out favourite articles and find them, years later, yellowing paper crackling in a pile of memories, is something to be cherished. So congratulations to the Brentwood Gazette for reaching its centenary, and may it long continue to reflect our local community and all that is good about it.