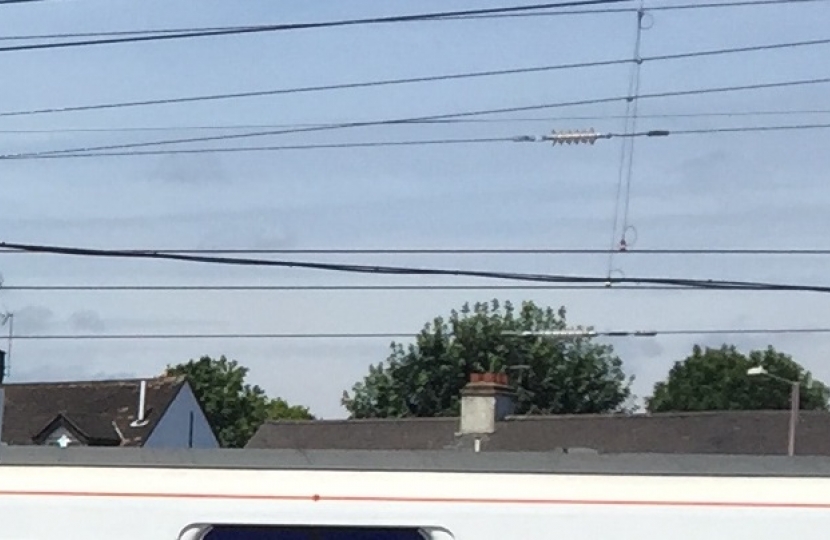 A number of constituents have written to me to express their disappointment and frustrations about delays on their daily commutes to London since the Christmas engineering works ended, having already suffered huge disruption over the Christmas and New Year period due to track closures and a rail replacement bus service.

I have been in touch with Network Rail to find out why the Christmas works to improve our rail infrastructure appear to have made things worse for a significant number of commuters already, and have received the following response:

"As you’ll know, the number of passengers travelling on Britain’s railway has doubled over the last 20 years, and to allow operators to run safe and reliable services in the long term, we have to maintain, renew and enhance our assets.

Most of this work has to take place when no trains are running, which means we either have to work overnight during the period between last and first trains, or close the railway for longer periods. When we factor in setup, testing, and handing back the infrastructure, along with some margin for risk, the time we have at night – and thus the scale of what is possible – is relatively small.

As a result, we have to undertake more substantial activities during closures at the weekends and over the festive period. Whilst there is never a good time to close the railway, passenger numbers are always significantly lower over at these times, and by deliberately aligning our work to such periods of reduced demand, we affect fewer passengers and have less impact on the economy.

We recognise the inconvenience caused by the recent closure, but this allowed us to undertake a range of important projects on the Great Eastern main line that will benefit Alex’s constituents. This included:

I want to emphasise how disappointed we were that we were unable to support a good service on the first full working day of the new year, particularly given the closure that had just concluded.

The delays on Tuesday 2 January were caused by a track fault that occurred near a set of points in the Ilford area on the main line for services into London. At around 0631, after around 20 trains had passed over this location without experiencing any issues, a driver reported a rough ride to the signaller. Staff were called to attend and arrived at 0706. They allowed trains to continue running over the section, with each driver being told to proceed at slow speed and report poor riding. None reported any problems up to 20 miles per hour, and it was determined that providing a temporary speed restriction at this level was put in place, trains could safely run over this section of track until the end of the morning peak. As a result, all main line trains were delayed by between 10 and 30 minutes, and in order to minimise delays, a small number of trains had to be cancelled.

Once the morning peak concluded at 1009, we closed the main lines between Gidea Park and Ilford, and diverted all off-peak main line trains onto the parallel slow lines in order to carry out remedial works. That work required 14 staff to manually move the track around 40mm using jacks, which corrected the alignment fault that led to the rough ride. This work was finished at 1110. It is important to stress that fixing the fault any earlier would have been significantly more disruptive, as creating a safe worksite would always have necessitated the temporary closure of both main lines.

Sadly a fatality occurred on the electric lines at Seven Kings station at 1031, just a few hundred yards away from the site of work, which meant we had to close these lines from 1031 to 1135. This resulted in all four lines being shut to traffic from 1031 to 1110, which caused significant disruption to services during this period.

We sincerely apologise for the impact this had on commuters on the first working day of 2019. Over the coming weeks, we will be completely re-aligning the entire track layout in this location, which will correct the problem permanently.

Performance on Wednesday 9 and Thursday 10 January

Since your initial email, passengers experienced further disruption on 9 and 10 of January, and I want to take this opportunity to set out what happened in these instances. At around 1820 on 9 January, a train driver reported a problem with the overhead lines at Ilford, where dangerous levels of electricity were sparking across the railway. To protect passengers and staff, we reduced the train speed through the area to 5 miles per hour while we located the problem. Following an extensive inspection, we found a damaged cable, two miles away, in our power feeder. To get trains moving for the following morning, we rerouted the power supply to bypass the fault.

Unfortunately, on the morning of the 10 January, we also had a temporary loss of power in the Bow area.  While this only lasted six minutes, it was enough to significantly disrupt the morning peak services into Liverpool Street. Issues were further compounded by a fatality at Margaretting.

We apologised again to passengers, and worked with Greater Anglia to publicise this message at our stations across the route and on social media throughout 10 January. We are undertaking detailed investigations as to how the cable became damaged and why the power supply tripped at Bow, but it is important to note that the failed components were not part of the overhead line system replaced during the Christmas period.

Our plans to improve performance

Looking beyond these specific events, we accept that performance is not where we would like it to be. We are determined to turn this around, and Anglia route have put in place a range of measures to improve performance in the short term, including using more predictive technology, cutting the time it takes our staff to get to incidents, and reducing the number of temporary and emergency speed restrictions on our network.

Looking to the future, Anglia route has secured significant additional investment from the Department for Transport for the next railway control period – CP6 – which runs from April 2019 to March 2024. We plan to spend £2.164 billion to operate, maintain and renew our infrastructure, which reflects a 21% increase compared to the current five year period. This is broken down into:

Unfortunately this does mean closures will continue in the future, but the increased investment should see an overall reduction in the number of infrastructure failures, which will have a positive impact on train performance."