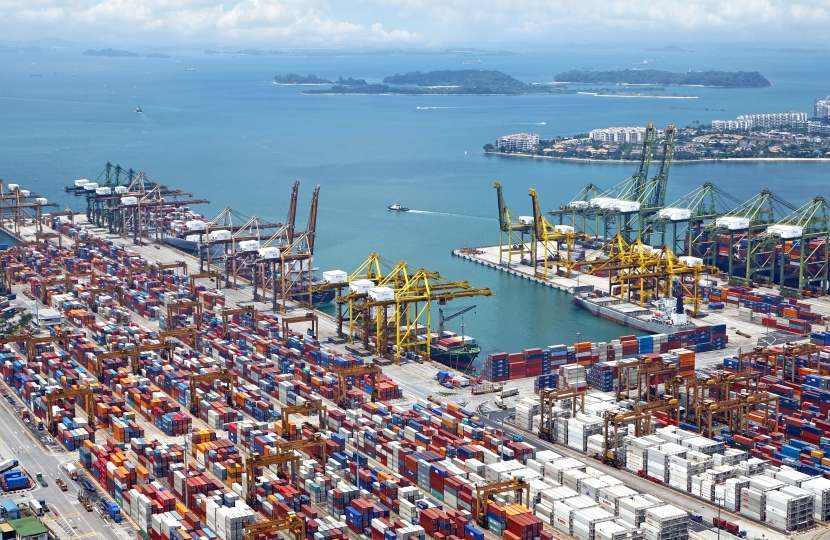 New research released today (March 10) estimates nearly 6.5 million jobs in the UK are supported by exports. Commissioned by the Department for International Trade and carried out by the Fraser of Allander Institute at the University of Strathclyde, it lifts the lid on the value of exporting-led jobs to the UK economy and helps inform the discussion around the untapped exporting potential of businesses across the country.

This ground-breaking research estimates that median wages in jobs directly and indirectly supported by exports were around 7% higher than the national median and that more jobs (3.7 million) are supported by exports to the rest of the world than to the EU (2.8 million). The Office for National Statistics also estimates that goods exporting businesses are 21% more productive than those who do not. It provides a clear rationale for pursuing an exports-led recovery from Covid and using trade liberalisation to boost strategic industries – such as services, tech and renewables – that are key to building back better from the pandemic.

The FAI research estimates the number of jobs supported by exports at a regional level. DIT is exploring how we could develop data that can provide similar insights at an even more local level.

An additional paper released today shows the number of jobs supported by nationally export intensive industries, broken down by constituency. This does not show how many jobs at the local level are export intensive, because local activity can vary significantly from the national average. But the information can act as a starter for a conversation until more granular estimates becomes available. It shows that in Brentwood and Ongar there were some 10,345 jobs (24.8% of total) in industries that were export intensive at a national level in 2019.

The research is accompanied by a new Board of Trade report – Global Britain, Local Jobs – that prescribes a series of policy fixes to unlock the UK’s full exporting potential and propel a trade-led, jobs-led recovery from Covid-19. This includes:

The Board – which is led by International Trade Secretary Liz Truss – argues the UK’s departure from the EU is an opportunity to deepen trade liberalisation and boost the role trade plays in the economy. It argues the UK should follow the likes of Australia, Singapore and New Zealand, who have all used trade liberalisation to spur growth and capture global market share.

The report advocates deeper trade ties with faster growing nations outside Europe, with 65% of the world’s middle classes set to be in the Asia-Pacific by 2030 and nearly 90% of world growth expected to be outside the EU in the next five years.

It recommends the UK ‘ride’ the digital and green waves, highlighting the UK’s comparative advantage in those industries, with the exporting potential of the green economy set to be £170bn per year by 2030, and argues the UK should lead the charge for a more modern, fair and green WTO by working with like-minded allies on issues like industrial subsidies.

The report is being launched at a virtual Board of Trade meeting this morning, hosted by Truss, and will be sent to MPs and Parliamentarians. It comes ahead of next week’s publication of the Government’s Integrated Review of foreign policy, which will set out the strategy for expanding free and fair trade and making our domestic supply chains more resilient in order to drive prosperity in the UK and around the world.

This report shows how Global Britain will deliver jobs and growth across the UK, particularly in areas like the north-west and north-east of England. Export-led jobs are more productive and higher paying, but currently too few businesses export and our economy would benefit from being more international. This potential can be liberated through more trade deals, boosting our role as global hub for digital and services trade, and by pursuing policies that drive an exports-led recovery.

The opportunity we have as an independent trading nation is huge. Today’s report outlines how we can do things differently and capitalise on defining trends like the emergence of Asia’s middle classes and rapid growth in the Indo-Pacific.”

Dr. Linda Yueh, Board of Trade Adviser and economist, said:

The damage from the pandemic has been considerable. Trade can help with the economic recovery and create jobs across the country as set out in the study that accompanies today’s report. It’s thus important that the UK promotes fair and free trade to open up opportunities for our businesses and work with partners to improve the global rules-based system.”

The Hon Tony Abbott, Board of Trade Adviser, said:

There's no doubt that more trade means more jobs and more trade with high wage economies means more high wage jobs at home. I am pleased to be associated with this report advocating an all-round reduction of trade barriers between countries with market economies under the rule of law. Especially at this time - with pandemic driven border closures and supply chain disruptions - the case for openness needs to be proclaimed.”

Free trade lifted Britain above the run of nations, and made us the wealthiest country on the planet. Now, as we recover our trade policy after half a century, we can once again be the world leading free trade champion - not just for our own benefit, but for the world's.

Trade is the greatest poverty-buster anyone has come up with and, as we open our markets, we can take satisfaction in the thought that, the richer we get, the richer our trading partners get too.”

Trade offers the UK a powerful route to post-pandemic recovery for the whole country – supporting the levelling up agenda and a green economy.  These recommendations need to form an important part of the new export strategy, supporting an economic vision which enables businesses of all sizes to export and invest.”

Revolut welcomes the Board of Trade report released today - Global Britain, Local Jobs. As one of the UK's fastest growing tech companies with a presence in over 20 countries, we recognise the enormous opportunities to export the best of British technology to the world.

“With greater access to new markets through free trade agreements, the UK can harness the next wave of innovation, creating more jobs locally and taking our products to even more customers around the world.”

While the methods and assumptions adopted within the FAI research are the best currently possible, the estimates cover 2014-2016 in the absence of more recent data. However, they still provide a reasonable guide to the relationship between UK exports and the labour market in more recent years, though some caution is needed in their interpretation.

About the Board of Trade:

The Board of Trade advises the government and DIT on its trade strategy, provides intellectual leadership on trade policy, and helps Britain make the case for free and fair trade across the world. Advisors are unpaid.

nations and regions to take up the opportunities of international trade. The Board and Advisers meet quarterly and engage extensively with businesses, communities and consumer groups across the UK, to ensure a range of voices are heard as the UK develops its independent trade policy.