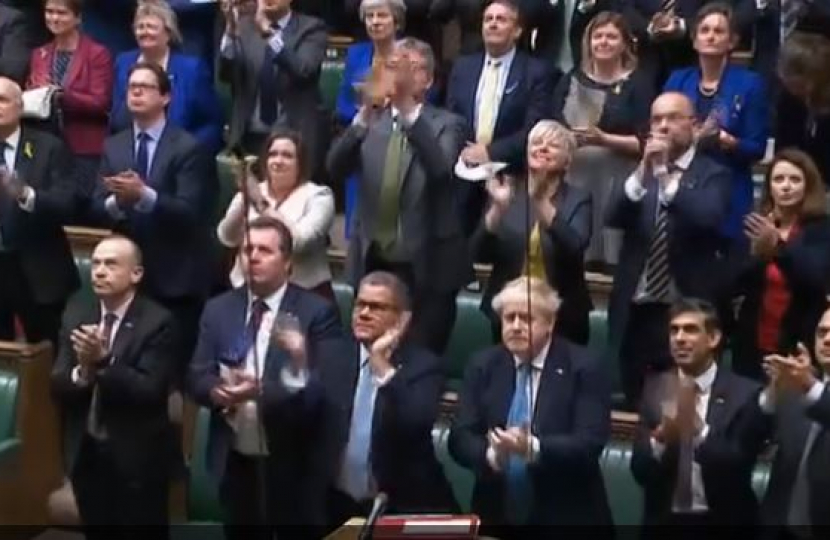 Clearly this is a rapidly changing situation, so please look on the Government website for the latest updates here: https://www.gov.uk/government/topical-events/russian-invasion-of-ukraine-uk-government-response

If you want to offer accommodation for those fleeing from Ukraine, the Government Homes for Ukraine Scheme is now open.

President Putin has unleashed a full-scale invasion of Ukraine by land, sea and air. This is a premeditated and wholly unprovoked attack on a sovereign democratic state. My thoughts are with the Ukrainian people and their President, whose defiance, courage and patriotism in the face of foreign aggression is inspiring. I was honoured to have been in the House of Commons Chamber when the Ukrainian Ambassador was present, and when President Volodymyr Zelenskyy addressed the Chamber from Ukraine. The applause from all Members of Parliament is a mark of our respect for them and all their country is going through.

The UK and allies have been clear all along that there would be a severe cost for any further Russian military incursion into Ukraine.

I commend the world leadership shown by the Prime Minister in support of Ukraine over these past months, and the leading role he has played in encouraging the free world to impose the most severe and coordinated package of sanctions Russia has ever faced in response to Putin's illegal invasion of Ukraine. In lockstep with allies, the UK is:

In addition, the Home Secretary has decided to shut the Tier 1 Investor visa route to all new applications from all nationalities with immediate effect.

On 31 January, the Foreign Secretary announced new legislation in Parliament to toughen and expand the UK’s sanctions regime in response to Russian aggression against Ukraine. Under the existing regime, the UK had only been able to sanction those linked to the destabilisation of Ukraine. Now, a much broader range of individuals and entities can be sanctioned due to their significance to the Kremlin. These powers will go further than ever before, and mean that the UK stands ready to hit the Russian state where it really hurts should it invade Ukraine.

The UK has, for a number of years now, worked to support Ukraine's security and defence. The UK has trained over 22,000 members of the Ukrainian army through Operation ORBITAL and, since 2019, assisted Ukraine to build up and sustain a naval capability. In the months prior to the invasion, the UK provided extra support in the form of 2000 anti-armour missiles, which the Ukrainians are now putting to good use. The UK has sent further military support (lethal aid in the form of defensive weapons, and non-lethal aid such as body armour and helmets) to Ukraine since the invasion.

The Defence Secretary recently hosted 25 countries as part of an international conference of donors for lethal and non-lethal military aid to Ukraine, coordinating donations and organising aircraft and support for donations to be delivered.

I understand, of course, people’s desire to see a no-fly zone instituted above Ukraine. However, I would highlight the words of the Minister for the Armed Forces, James Heappey, in the House of Commons that such a policy would present too high a risk of miscalculation and escalation that could ultimately lead to the inadvertent triggering of NATO’s Article 5.

More than 1,000 British troops have been made ready to support NATO and allies in the event of a humanitarian crisis. These troops are at readiness in the UK to support a humanitarian response in the region should it be needed.

On his visit to Poland on 1 March the Prime Minister announced that the UK is committing another £80m in aid to Ukraine to save lives, protect vulnerable people inside the country and in the wider region and to tackle the growing humanitarian crisis. After the £100m economic package for Ukraine and £40m in humanitarian aid announced in February, this brings the UK’s overall aid support for Ukraine during the current crisis to £220 million. The UK is also guaranteeing up to $500 million of loans to Ukraine through Multilateral Development Banks.

The Government is also matching the first £20 million donated by the British public to the Ukraine Humanitarian Appeal, see: https://donation.dec.org.uk/ukraine-humanitarian-appeal

The Prime Minister has said that nothing is off the table when it comes to the UK's support for Ukraine's sovereignty and territorial integrity and indeed the desire of its people to live in peace, democracy and free from foreign bullying.

Putin must fail. I am assured that the UK Government, standing alongside our friends in Ukraine and allies around the world, using all possible means at its disposal, is urgently engaged in ensuring he does. I am following these efforts closely.

The British Embassy in Kyiv has temporarily relocated. Embassy staff are operating from the British Embassy office in Lviv. British nationals in Ukraine should heed the FCDO's travel advice for Ukraine. FCDO rapid deployment teams have been deployed to countries neighbouring Ukraine to assist UK embassies in supporting British nationals who have crossed Ukraine's borders, including Poland, Hungary, Slovakia, Romania and Moldova.

The FCDO advise against all travel to Ukraine and is recommending that British nationals still in Ukraine should leave immediately if it is safe to do so. I understand people’s desire to help in this terrible situation and I would highlight that the Ukrainian Embassy to the UK has set up a special fund to provide humanitarian assistance to Ukraine’s civilian population and to purchase medical and military supplies for Ukraine’s army. It is possible to donate at withukraine.org. As such, I would dissuade any Brit from travelling to Ukraine, whatever the reason.

The Government has taken measures to ensure that those with family ties to the UK are able to join their families in the UK. Concessions have been made to the family rules to allow Ukrainian family members of Settled persons or British Nationals to come to, or remain in, the UK when they would otherwise not meet the core requirements of the family rules. Changes to Immigration Rules will come into force from 15 March, with a bespoke application process open from Friday 4 March.  Family members of British nationals in Ukraine who wish to apply for a visa under the Family Migration route should call 0300 3032785 for assistance before making an application. This is a dedicated line. Further information can be found here: https://www.gov.uk/guidance/support-for-family-members-of-british-nationals-in-ukraine-and-ukrainian-nationals-in-ukraine-and-the-uk.

Members of the public wishing to make financial donations can do so here: https://donation.dec.org.uk/ukraine-humanitarian-appeal

Essex County Council is coordinating local offers of non-financial support. ECC have set up a dedicated Facebook page, 'Essex is United for Ukraine'. The page provides details of the organisations across Essex who are supporting humanitarian efforts through donations and fundraising, linking them up with residents who want to help. The initiative is led by the Essex Is United Facebook team, which is a collaboration between local Facebook admins, the County Council and the Public Health team.

You can see Alex's latest speeches and appearances in Parliament below (provided by TheyWorkForYou):