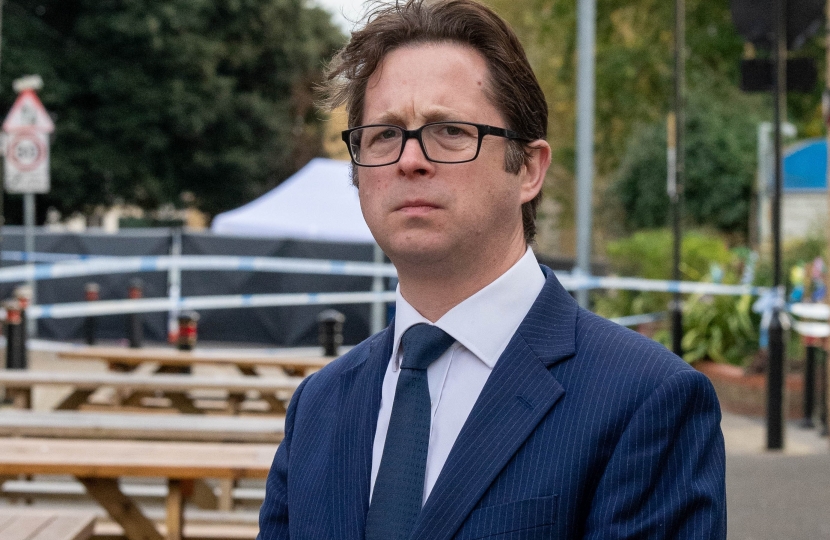 Just a week after the death of my great Parliamentary colleague, Sir David Amess, in a suspected terrorist attack in Southend, here in Brentwood two teenage boys died in an incident in the early hours of Saturday morning. As I said at the weekend, it was a very dark day for Brentwood, and my thoughts are very much with the boys’ family and friends.

Everyone has, understandably, been shocked and upset by this terrible event but hopefully we can all take some small comfort from the fact that the Police have made it clear that it appears to have been an isolated incident, that officers do not believe there is a wider threat to the public and that they will be providing more police on the streets over the next few days.

I met the District Commander of the Community Policing Team, Chief Inspector Ant Alcock, at Brentwood Police Station just over a week ago and discussed policing in the area, including the High Street and night time economy. It seems the stresses of the last year has led to some tension, with domestic violence and anti-social behaviour an ongoing issue, but we are fortunate that the Brentwood policing team is now at full strength. This is largely due to the work of the Police, Fire and Crime Commissioner, Roger Hirst, in working with the Government to bring 500 new police officers to Essex since 2019, with another 300 still to come.

This is of little comfort, I know, to those affected by the events of the weekend. We will all need to reflect deeply once we know more about the details of the incident - in the meantime I must encourage anyone who has any information about the events that took place to come forward and assist the police in their inquiries so that justice can be served as swiftly as possible.