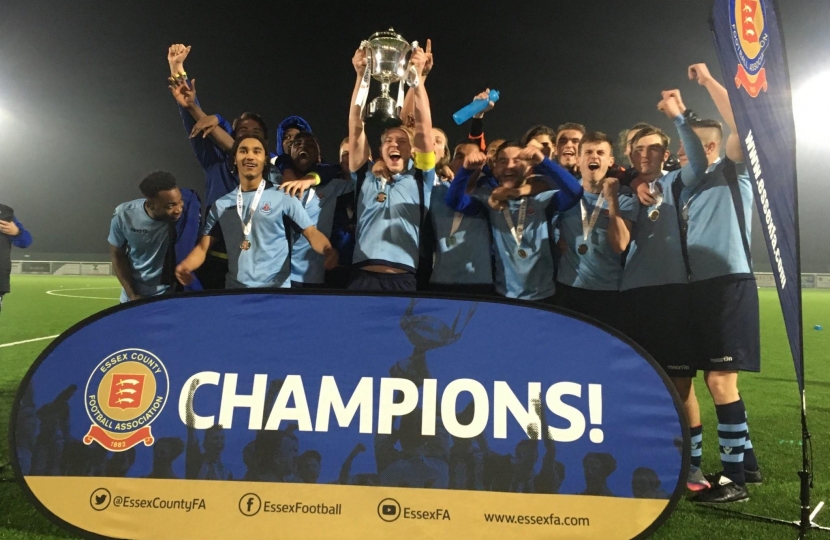 In a week when the votes in Parliament over the UK’s withdrawal from the European Union have come up with no clear winners and extra time has now been called, it was a welcome relief to hear of the undeniable success of one of our local football teams.

Ongar Jubilee FC U21’s have become, in the last couple of weeks, not only the Essex Olympian Football League U21 Division One Champions but also the winners of the Essex Junior Trophy.

This young team of local lads is only in its second season of playing but have become a strong force in the Essex Olympian Football League. And they’re hoping to compound their victory with the treble on 30th April in the final of the Denny King U21 Knockout Cup.

I feel Parliament could do with a dose of their youthful enthusiasm at the moment and have invited the whole team and coaches for a visit to the Palace of Westminster. Westminster Hall in particular is used to sporting endeavours – a number of canvas tennis balls, stuffed with human hair, were found during repairs to the roof in the 1920 and were believed to have got there when Henry VIII used to use the hall as a ‘real’ tennis court.

Unfortunately, as I write I am hearing the winning streak has not been reflected in the bid by TfL to the Department for Transport’s Access for All funding for a lift on Platform 4 at Brentwood Station. I’m deeply disappointed the bid, which would have made rail travel far easier for those in our community with disabilities or limited mobility, has not been successful.  This is an issue I will be taking up with the DfT and will continue to campaign for funding to be made available for this important missing link in our transport system to be rectified.