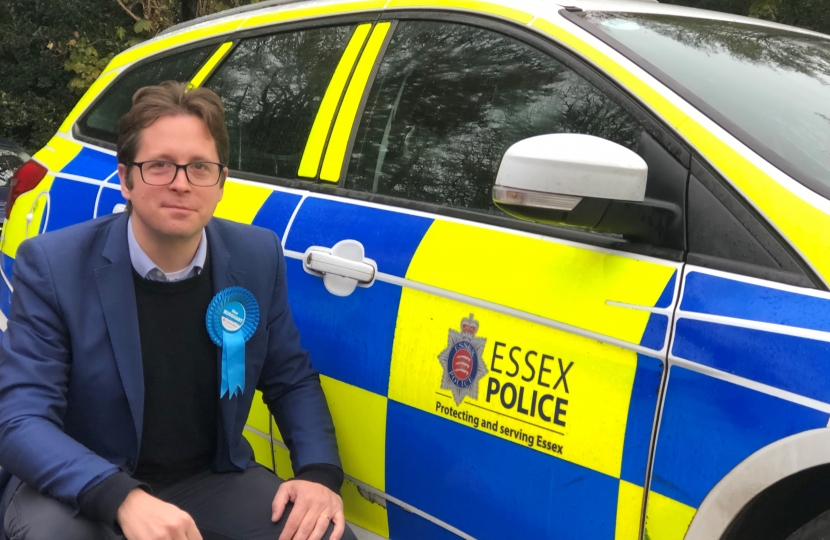 The addition of these new officers brings the total number of police across Essex up to 3,493, meaning there are now more frontline officers on our streets to keep the public safe. The Government has smashed its first-year recruitment target and is well on track to recruit the new bobbies promised.

Thanks to the work of Roger Hirst, the local Police Fire and Crime Commissioner for Essex, we are getting even more new officers than first expected as Roger has managed to bring in additional funding to fight crime. These new resources are going to help further reduce crime locally and keep it low.

An increasing national and local priority is tackling domestic abuse which has, unfortunately, been on the rise during lockdown. I know improved response to domestic abuse is one of Roger’s priorities locally and, in Parliament, the issue has been heavily debated in the past few months, with the Domestic Abuse Bill receiving Royal Assent last week.

The Act will create a new statutory definition of domestic abuse, emphasising, among other things, that domestic abuse is not limited to physical violence but can also be emotional, controlling or coercive, and economic abuse. The ‘controlling or coercive behaviour’ offence will be extended to cover post-separation abuse, local authorities will be given a duty to provide specialist support to victims, and suspects will no longer be allowed to cross examine victims in family and civil courts.

This is a major step forward in ensuring that perpetrators of abuse are brought to justice which will offer further protections to the millions of people who experience domestic abuse.