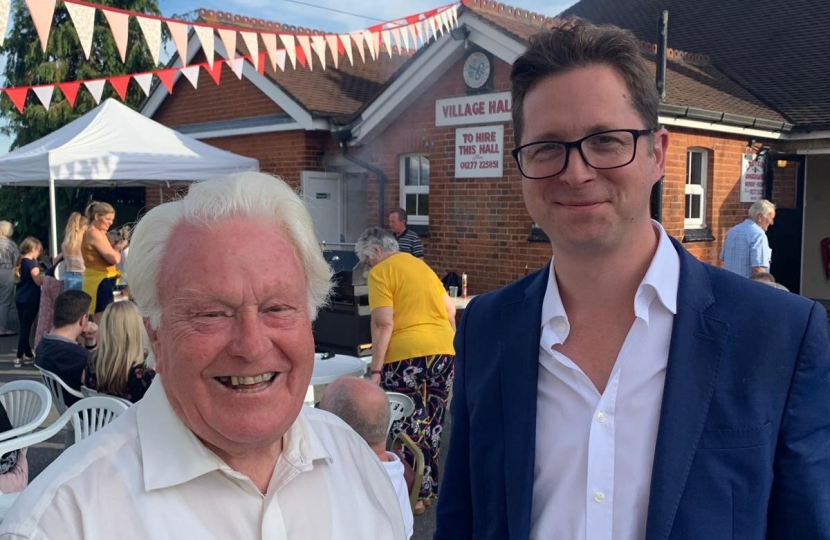 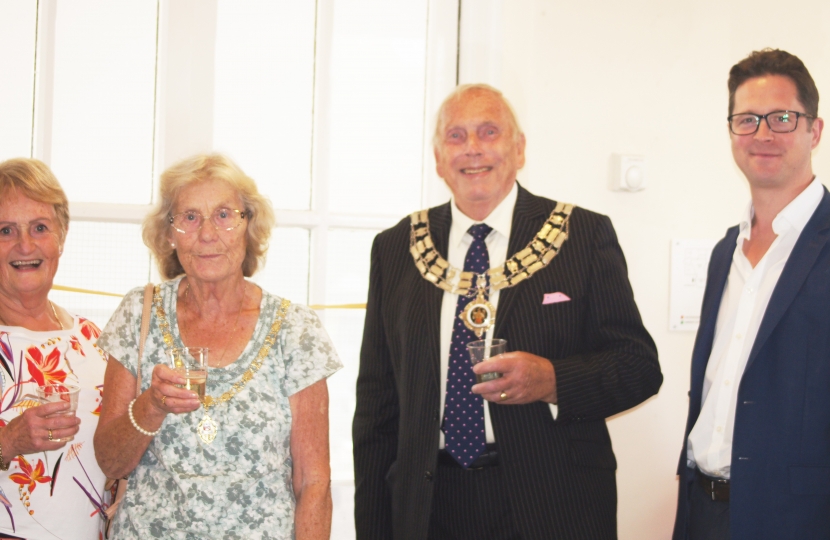 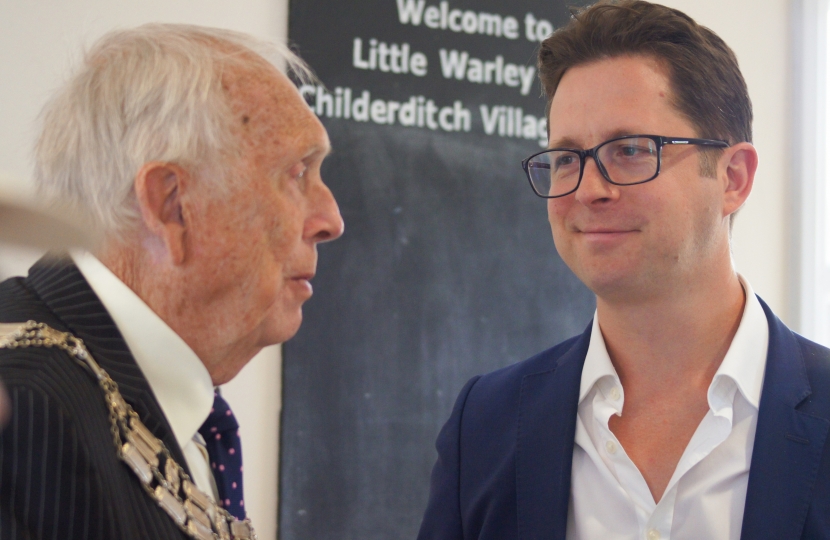 I was honoured to be invited to take part in the official reopening of the hall earlier this month, together with the Mayor of Brentwood, Cllr Keith Parker. Local resident, and Honorary Alderman of the Borough of Brentwood, David Tee has written about the re-opening and I cannot better his words:

"Thirty years ago the late Peter Davis, Little Warley farmer and one time Village Hall Chairman, had the ambition and dream to remove the 1960s false ceiling and restore the interior roof space of the former school assembly hall. But the mess and dilapidation of the roof space, the cost and the disruption for the users of the hall put the dream on the back burner for three decades until last year when the present Village Hall Chairman, Jackie Civil, set in motion to make the dream come true. Committee members, Terry Humm and Susan Crane, started painstaking work of applying for grants. Also Peter Bennett was asked to set out the work that was needed to be done, then provide the Committee with three competitive quotations.

By February this year Peter Bennett advised the approval of the best estimate from Aquanera Construction for £54,000. Terry Humm and Susan Crane reported the delivery of grants: £10,000 from The National Lottery Small Grants, £3,000 from Fowler, Smith and Jones Trust, £3,000 from Charles French Trust. We also had huge support and referrals from Sue Gibson of The Rural Community Council of Essex (RCCE). The Hall was closed for six weeks and work started on Monday 22nd July. Peter Bennett acted as Clerk of Works visiting the Hall almost every day until the job was completed on time on Monday 2nd September.

On Saturday 14th September at 4.00pm sixty four village folk came to the Hall for a BBQ Party in the warm late Summer sunshine to celebrate the successful conclusion of this magnificent project. We were honoured for this official reopening with the presence of The Mayor and Mayoress of Brentwood, Cllr Keith Parker and his wife Frances. Also our Member of Parliament and his wife, Alex Burghart MP and Hermione.

There was much praise all round and especially for Peter Bennett who literally watched over every stage of the work. With out exception as every one came into the Hall they were over whelmed by the quality of the workmanship and the amazing improvement. Surely our Village Hall must now be the best in the Brentwood area and the most attractive for parties and receptions.

Sue Gibson of the RCCE said: "It is a fantastic achievement for your Village". The Mayor of Brentwood said: "From an ex school that became a Village Hall is now an even better Village Hall". Alex Burghart MP said: "Little Warley and Childerditch are a remarkable friendly community, good neighbours who enjoy their village life and I congratulate every one".

Villagers gave three very hearty cheers to our special guests when they left and well after 6 o'clock the party came to an end as the sun went down behind the trees and the cool air drifted over Little Warley Common. A job well done and a party much enjoyed.    DWT"