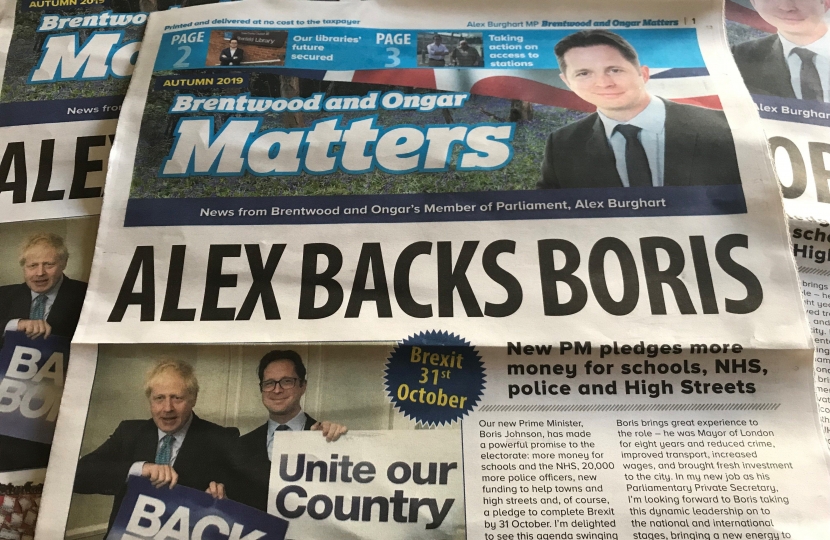 As the Gazette goes to press the parliamentary term is poised to begin – and it promises to be a parliamentary term like no other. I am writing this on Monday 2 September – by the time you read this on Wednesday things may have moved on a good few steps, so apologies if this is already out of date.

The Prime Minister has spent the summer talking to the EU about the terms of our departure which he has promised to deliver by 31 October. He has had high-profile meetings with Chancellor Merkel in Germany and President Macron in France and has attended the G7 in Biarritz with the leaders of the seven largest advanced economies in the world. His message has been simple – either there needs to be changes to the draft withdrawal agreement or the UK will leave the EU without a deal at the end of the October. The Prime Minister is very keen that we leave with a deal to minimise disruption to the country but he is clear that should a deal not be possible we will leave anyway.

In his first weeks in the job he has already made a huge impact, committing to put 20,000 additional police on the streets to tackle crime, to put billions more into the NHS, and to hugely increase spending on primary and secondary education. I am fully supportive of his agenda. I know how much this additional investment will benefit people in our local area, how it will take the fight to the criminals, reduce waiting times in GPs’ surgeries and local hospitals, and give young people the opportunities they deserve.

In order to take this work forward, the PM has asked the Queen for a Queen’s Speech to set out his programme of legislation. By convention this involves Parliament not sitting for a few days – in this case we will stop sitting some time next week and come back on 14 October. In practice this means that between five and seven sitting days will be lost as Parliament would ordinarily break at this time of year for three and a half weeks for Conference season.

I’m pleased to say that, contrary to some reports, Parliament will have plenty of time to debate Brexit before and after the break for the Queen’s Speech. I have no doubt that that debate will continue to be robust and lively!