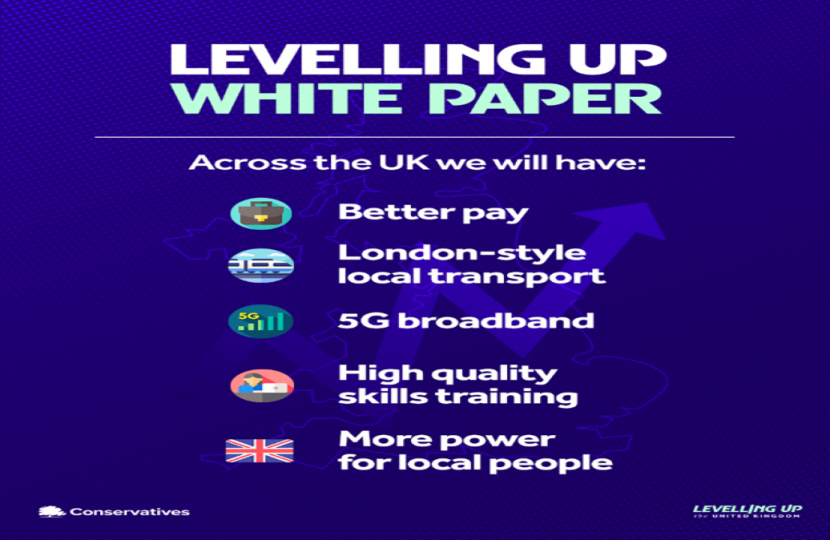 Alex Burghart MP has welcomed the Levelling Up White Paper unveiled by the Levelling Up Secretary, Michael Gove, on 2 February 2022, and the benefits it will bring to Brentwood and Ongar. The document sets out the Government’s plan to transform the UK by spreading opportunity and prosperity to every community in every region of the country.

At the heart of this new way of making and implementing policy will be 12 bold national missions – all quantifiable and to be achieved by 2030. These missions will be cross-government, cross-society efforts.

By 2030, the missions set out by the Conservative Government will see:

As the White Paper states, 'the East of England is already benefting from investments to boost living standards, spread opportunity, restore local pride and empower local leaders' - more information can be found on pages 250 to 253 of the White Paper, which you can find as an attachment at the bottom of this article.

We are committed to levelling up the whole of the UK by increasing wages, living standards, and quality of life, which is why I welcome the White Pape and its ambition to create jobs, spread opportunity and empower communities across the UK.

It is encouraging to see the ambitions of the Government to continue to level up the East of England, which will bring huge benefits to Brentwood and Ongar.

From day one, the defining mission of this government has been to level up this country, to break the link between geography and destiny so that no matter where you live you have access to the same opportunities.

The challenges we face have been embedded over generations and cannot be dug out overnight, but this White Paper is the next crucial step.

It is a vision for the future that will see public spending on R&D increased in every part of the country; transport connectivity improving; faster broadband in every community; life expectancies rising; violent crime falling; schools improving; and private sector investment being unleashed.

It is the most comprehensive, ambitious plan of its kind that this country has ever seen and it will ensure that the government continues to rise to the challenge and deliver for the people of the UK.”

The United Kingdom is an unparalleled success story. We have one of the world’s biggest and most dynamic economies. Ours is the world’s most spoken language. We have produced more Nobel Prize winners than any country other than America.

But not everyone shares equally in the UK’s success. For decades, too many communities have been overlooked and undervalued. As some areas have flourished, others have been left in a cycle of decline. The UK has been like a jet firing on only one engine.

Levelling Up and this White Paper is about ending this historic injustice and calling time on the postcode lottery.

This will not be an easy task, and it won’t happen overnight, but our 12 new national levelling up missions will drive real change in towns and cities across the UK, so that where you live will no longer determine how far you can go.”

Our Conservative record on levelling up the UK:

I have received correspondence from several constituents who are affected by slow broadband speeds in a number of locations within Brentwood and Ongar.